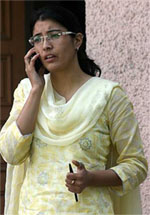 An emotional Ovessa Iqbal, the first Muslim girl from Jammu & Kashmir to ace the UPSC exam, talks with rediff.com's Mukhtar Ahmed about the inspiration behind her success and how she coped with failure having passed the exam in her third attempt.

When good news finally came in after two failed attempts - Ovessa Iqbal, a resident of one of the country's remotest areas, Ladakh, missed her mother the most.  Having passed this year's most-coveted UPSC exam revived fond memories of her mother whom she lost years ago.

Her mother had always egged her to appear in the civil services examination and when the happy news finally came in she was not there to see her daughter realise her dream. "She always had hope and faith in me and would often tell me that I could bring laurels to my family", said Ovessa, as she received news of her selection for the civil service.

A lecturer in a government college in Leh, Ovessa's mother was claimed by a train accident while on an educational tour in Andhra Pradesh way back in 2000.