(Books) A book of Essays (English) by Kalpana Rajaram 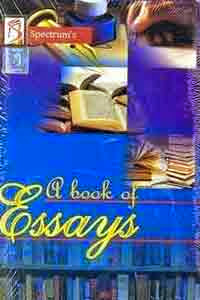 A book of Essays (English) by Kalpana Rajaram

A book of Essays (English) is a comprehensive book for candidates preparing for the Civil Services Examinations. The book comprises of essays from varied fields of interest—social issues, politics, economics, scientific and environmental study such as paradoxes of democracy, the role of opposition in a democracy, corruption in public life, politics and religion, the changing face of terrorism, child labour and capital punishment. In addition, the book also consists of a section with a large selection of quotations from various famous works. This book is essential for candidates aspiring to work for the Union Public Service Commission of India.

About Spectrum Editorial Board

Spectrum Editorial Board is a panel of expert editors from Spectrum Publishing House. They produce books on current affairs and general knowledge like International Organisations: Conferences and Treaties, Public Administration: Theories and Principles, Gandhi, Nehru, Tagore and Other Eminent Personalities of Modern India, etc

Introduction to the Essay
Paradoxes of Democracy
Democracy implies tolerance of dissent
The Role of Opposition in a Democracy
Role of Judiciary in a Democracy
Judicial Activism
Elections - Lacunae and Remedies
Corruption in Public Life
Politics and Religion
Communalism
The Politics of Communalism
The Rights and Wrongs of Conversion
Should there be reservations?
Women should have reserved seats in Parliament
Is India ready for a uniform civil code?
An Apolitical Defence Force
India’s Defence Needs in a Technological Scenario
United Nations - Role and Future
Human Rights
Can Human Rights be Universal Rights?
Status of Human Rights in Independent India
Human Rights and the Indian Armed Forces
Torture - The Living Death
The Changing Face of Terrorism
Can Terrorism be Justified?
Economic Liberalization - challenges before India
Privatization of the Economy
Private Sector versus Public Sector
India’s Population and It's Economic Implications
Transforming our Huge Population into Human Resource
Development and Population Control
The Two - Child Norm for Population Control
People’s Participation in Development
Tourism - Potentials and Problems
The Changing Face of Indian Society
Changing Idea of Family
The Problems of Old Age
Law as an Instrument of Social Change
Morality and Law
Education in India - Lacunae and Remedies
Privatization of Education - Solution to Resource Crunch
Child Labour
Problems of Working Women
Violence against Women
Women need empowerment
Ragging should be curbed
The Rights and Wrongs of Free Expression
Advertising and Social Responsibility
Indian Cinema and Social Responsibility
Challenge Before Television in India
Television and Teenage Violence
Foreign Media in India - Any Cause for Concern?
The Politics of Information
The Scientific attitude rather than science is the need of the day
Moral Dilemmas Inherent in Scientific Progress
Are science and art antithetical to each other?
Science and Literature
Science without religion is lame, religion without science is blind
Computers - A Silent Revolution
Information Revolution
Sustainable Development and Environment
Pollution
Humans are the worst culprits in environmental degradation
Biodiversity
Are human beings able to cope with natural disasters?
What freedom means to me
Euthanasia - Can death be a therapy?
Non-Violence
Leadership
Leisure - Its Use and Abuse
If the British had not colonised India
History repeats itself
History needs to be rewritten
On Good and Bad Neighbors
Superstitions
Sports sans Sportsmanship
Ethics in Sports
Why Ban English?
Men have failed, let women take over
India Today
The Indian Republic
Generation Gap
The Child is the Father of Man
Compassion is the basis of all morality
The road to happiness is always under construction
Our deeds determine us as much as we determine our deeds
Truth may be eclipsed but not extinguished
Crime - New Dimensions
Capital Punishment
If human beings can be cloned
Material Progress and Human Values
Animals too have rights
Growing Flexibility in Gender Roles of Men and Women
Relevance of Gandhi Today
Essays in Brief
How free are we?
Democracy in India
Road Rage and Democratic Values
Media Freedom and Individual Privacy
Laughter, Truth, and Universality
Protection from Internet Abuse
Terrorism can never lead to democracy
Politicians Above the Law
The Problems of a Huge Population
Gender Bias in Health Concerns
Goals for child welfare remain on paper
Is teaching just a job?
The world needs more tolerance
Criminalization of Politics
Is the nation - state dying out?
Should there be liquor prohibition?
No one knows what he can do till he tries
The test of democracy is the freedom of criticism
The great end of life is not knowledge but action
Should smoking be banned in public places?
Education is Freedom
The tragedy of old age is not that one is old but that one is young
Is government going out of fashion?
Green activism can go too far
Indians are non - violent by nature
Indians are not non - violent by nature
Death penalty solves nothing
Don’t ban capital punishment
Violence on the Increase
Examinations are a necessary evil
Pleasures of Reading
Can television affect society?
Science - Blessing or Curse?
From the World of Quotations