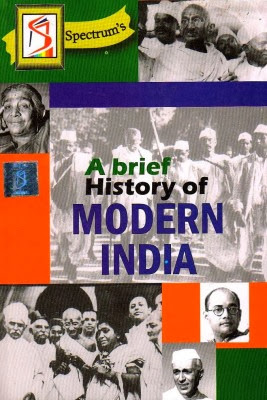 The history of modern India is so vast that one volume will not be enough to capture it. But this book manages to bring out the most essential aspects and incidents that occurred in modern India’s past. It begins with the revolt of 1857, detailing the reasons for the uprising, and goes right up to India claiming independence.

The nationalist movement is covered in three different stages. The book also touches upon the various changes that the British government brought to India. It talks about its effect on the administration and the economy of India.

A Brief History Of Modern India also highlights the various reform movements that took place across the country by the tribals, workers, and peasants. It also talks about the civil rebellion and all those involved in it. The book even features a ready reference section. This covers the lives of famous personalities who played an important role in India’s fight for freedom. It also describes the yearly sessions of the Indian National Congress. It even educates readers with the names and details of the various viceroys and governors of India.

A Brief History Of Modern India is systematically divided into different chapters covering topics like Indian states, the evolution of the Nationalist Foreign Policy, the development of education and the Indian Press. At the end of each chapter, the brief summary provided ensures that readers get a recap of the important points.