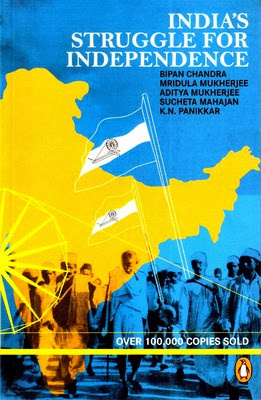 Designed for ardent history enthusiasts, India's Struggle For Independence is one of the most exhaustive and precise account of the struggle of Indian Independence ever written in the literary world. Written and edited by five expert authors, it presents a detailed outlook on one of the most important periods in Indian history.

The facts and details provided in this book have been gathered from oral and written sources, and various other primary sources have been used along with years of intense research. Written with a very concise approach, it is a one of a kind book that details the intricacies of the Indian Independence struggle.

The struggle for Indian Independence took a long time and was something that affected the whole country. Every state in the country boasted of some kind of revolt – minor or major during this period. Numerous revolutionaries throughout the country came together in their efforts to fight against the British rule and set their country free. Few of the chapters in the book are The Fight to Secure Press Freedom, Foundation of the Congress: The Myth, World War I and Indian Nationalism: The Ghadar, An Economic Critique of Colonialism, Peasant Movements and Uprisings after 1857, The Non-Cooperation Movement—1920-1922, The Gathering Storm-1927-1929, Civil Rebellions and Tribal Uprisings, and many more.

India's Struggle For Independence takes the reader on a journey across India as she was craving for her Independence. This book starts at the very first revolt of 1857 under the guidance of Mangal Pandey, from Rani Lakshmi Bai’s innate passion to free her country, Subhash Chandra Bose’s unmatched charisma and aggressive tactics, to Mahatma Gandhi’s famous civil disobedience and non-cooperation movement, to the final victory in 1947 when the British Raj finally came to an end.

The book reflects a coherent narrative as it incorporates the existing historiographical advances and yet provides an utterly new and clear view of this period in Indian history.