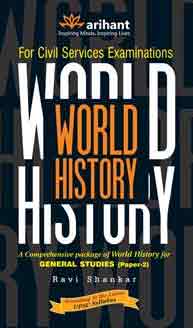 Ever wondered why Mahatma Gandhi chose non-violence over violence to overpower the Britishers away from India or why Adolf Hitler chose dictatorship which led to the death of millions in World War II. Understanding the ideologies and the role played by leaders like Adolf Hitler, Mahatma Gandhi, Nelson Mandela and various others in shaping the world history needs to be studied on a wider perspective. From a mere introduction of the events which took place centuries and years back, the study needs to be evolved to a much higher level of in depth understanding of the various historical events which led to the present world. Likewise World History for General Studies (Paper -2) has been designed keeping in mind the required in depth study of the various historical events from beginning of 15th century to how it transformed into its present state. This book will be useful for students studying Contemporary World, as well as for those who are preparing for various competitive examinations.

The book has been has been divided into 13 chapters namely, Renaissance, American Revolution, French Revolution, Industrial Revolution, Unification of Italy and Germany, Imperialism and Colonialism, Russian Revolution, World War I, World War II, Political Philosophies in Modern World, Liberation from Colonial Rule, Post War Foundations: NATO and European Community and Fall of the Soviet Union and USA's Domination. Almost each and every topic of world history has been covered in a crystal clear manner. The book covers the world history extensively from the beginning of 15th century to how it has transformed into its present state. All the events of the world history have been covered in a chronological order making it easier for the readers to comprehend the significance and the role played by those events in shaping the world history. All the chapters on wars and international relations have been grouped together along with relevant text material. Various political philosophies like Communism, Capitalism, Socialism, Nazism and Fascism and their effect on the society have been discussed in detail. While designing the book, efforts have been made to cover Major Conflicts & International Relations, internal affairs of the major powers – USA, Russia etc, Europe as an entity – The European Community and Communist Unity in Eastern Europe.

As the book has been designed strictly on the lines of latest UPSC Syllabus and keeping in mind the changing nature of the civil services examinations, it for sure will serve as an impeccable tool in getting thorough knowledge about the world history.