Ethics Vs. Morality and Values

Ethics Vs. Morality and Values

UPSCPORTAL presents yet another article for the paper- Ethics, Integrity and Aptitude. We thank our followers for appreciating the earlier articles.

This article gives a discussion over the relationship between Ethics, Morality and Values:

Ethics can be differentiated from Morality, as the latter is a set of beliefs and practices concerned with what is understood as good and evil. While ethics are philosophical deliberations that come up with the moral justifications and principles that guide our moral values. Thus, ethics has a wider scope than morality. However, still, the terms- ethics and morality are often used interchangeably.

While morality can limit the scope of human deliberation, in determining the goals and means towards the human ends, Ethics, on the other hand, lays faith in the free will of the individual, and gives enough room for the individual to deliberate upon different means to an end, while also providing a moral justification for the same. The obligatory character of ethical norms is derived from the very fact that they are derived on the basis of experience of the ages, based upon human free will.

An important principle of any ethical framework is Reciprocity. Every culture believes that one must do, to others, what one expects others to do for oneself. Thus, we can say that ethics are a code of conduct that we expect of others and so logically from ourselves also. This principle is found in the Mahabharata- 'do not do onto others as you would not be done by'; and in Christianity- 'Do unto others as you would, they would do unto you'.

This implies that we should not do anything, which is a deviation from our intrinsic nature- 'svabhava'. By acting such, our humanness would be able to manifest itself. Thus, another definition of ethics can be concluded as: acting in the light of moral principles, which may be viewed in as a body of social obligations and duties. Being a member of the human society, we owe to the society respect, to its ethos and values. Our behaviour in the society is a reflection of the values, to which we adhere. We act showcase to the world, our values through our deeds.

Moral codes of an ethical criteria are often linked to the religious ideas. True, that religion has a great influence over the society. All religions of the world have evolved from the darkness, to guide the human life towards virtuosity, for the well being of humanity itself. Thus, religion forms a foundational pillar of our values. That is why, the decline of values in the present society is often linked with the decline of the religious ethos. However, religion is only a shade of ethics. The scope of ethics is much larger than the realm of religion. 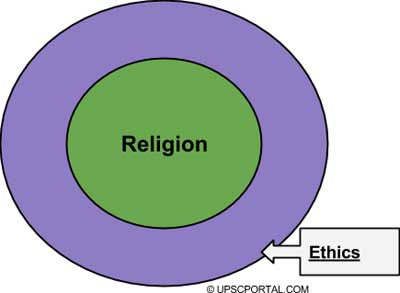 Thus, the distinction between Ethics and Values can be conceptualized as:

Values are the yardsticks which help in measuring the desirability or undesirability of any act, behaviour or practice. Due to this nature of the values, there can be some universal values that are admired by all cultures and societies. Whereas, Ethics become the manifestation of the different values in the human society. Ethical principles are altered to different shades to suit the human purpose, and achieve its goals.

Therefore, while values are, more or less, universal in character, ethical principles are custom-made by every society to serve the interest of the individuals living under its framework.

The effectiveness and reputation of a person is determined by two factors- One, the Skills, which are nothing but a technical competency to perform a task. A skilled person is able to act efficiently. However, merely having the skills does not make a person desirable and ideal. It is the second factor that plays a central role in making a person desirable to the society. Thus, the Second factor is the Values or Ethical Principles that a person adheres to. The contribution and role of an individual is determined by the values held by him. A person of high value and character would bring good to the society, as a whole; whereas, a person with poor values or vices can bring devastation to the society. That is why, a skilled person, with many vices is seen is a bigger threat than a person with low skill, but high values.

The modern society is suffering largely because, persons with high skills are unable to cultivate similar positive values. The result is that, highly skilled persons are engaged in the inhuman activities like- terrorism and fraud. A person with low skill but high value has a room to develop his skill through practice, but values are something that are inherent in the person, and are hard to change.

UPSCPORTAL will be coming up with more articles and study material on Ethics, Integrity and Aptitude. In the meanwhile, please feel free to contact us regarding your queries and problems.

We wish the Candidates, All the Best