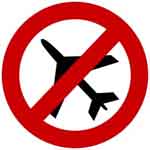 A no-fly zone is a territory over which aircraft are not permitted to fly.  Its objectives include:

So, such zones are usually set up in a military context, somewhat like a demilitarized zone in the sky.

No-fly zones of past

Iraq, 1991–2003: In 1991, the Western power intervened in Kurdish-Iraqi dispute in northern Iraq by establishing a no-fly zone in which Iraqi aircraft were prevented from flying. The objective of the no-fly zone was to prevent possible bombing and chemical attacks against the Kurdish people by the Iraqi regime.

Bosnia and Herzegovina, 1993–1995: In 1992, United Nations Security Council Resolution 781 prohibited unauthorized military flights in Bosnian airspace. This led to Operation Sky Monitor, where NATO monitored violations of the no-fly zone but did not take action against violators of the resolution.

To curb the violation of the no-fly zone, the Security Council passed Resolution 816, which prohibited all unauthorized flights and allowed all UN member states to take all necessary measures.to ensure compliance with the no-fly zone restrictions. This led to Operation Deny Flight .and Operation Deliberate Force by NATO.