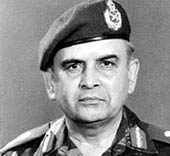 One of the most distinguished and decorated Field Commanders of the Indian Army. Has done most of Command and Staff assignments dealing with either J&K or North Eastern States, the last assignment being a Corps Commander and Security Advisor to Government of J&K from 2003 to 2005. During this period, his landmark contribution in fighting the ongoing roxy war in Kashmir is well known. Apart from brilliantly directing and coordinating antiterrorists operations of over one lakh elements of security force, it also included construction of anti-infiltration obstacle system along the LOC, opening Road Uri-Muzaffarabad as also construction of ‘AMAN SETU’ and earlier having raised a Division size Force during ‘OP VIJAY’ in 1999, all in a record time. His slogan of “Jawan aur Awam aman hai Mukam” and its manifestation on ground has brought in a new approach and momentum to the ongoing peace process in Kashmir.

Fought 1971 War on the Eastern Front as a part of Airborne Assault Group, which was the first Indian Army Unit to enter Dacca. In 1980s and 90s, apart from commanding the battalion on the China border in Arunachal Pradesh and being part of Sino-Indian Joint Working Group, also coordinated all counter-insurgency actions in the North East with various civil agencies, inter-ministerial groups and specialist delegations on behalf of the Army Headquarters. The peace process with Naga rebels also commenced during this period. Close interaction with the representatives of the armies and governments of Nepal, Bhutan, Myanmar and Bangladesh for effective border management and formulation of joint strategies to combat militancy, anti national/ criminal/hijacking activities were also part of his charter during this period.

Handled the Perspective Planning desk in the Army HQ from 2001 to 2003 and headed a Study on Restructuring of Army HQ, as also assisted in drafting ‘Army Vision 2020’. Retired as Master General of Ordnance in October 2006, wherein his stamp of dynamism is very distinctly seen in the field of material management of 1.2 million strong Indian Army, with varied and complex inventory costing over Rs. 50,000 Crores and the Annual Revenue Budget of Rs. 6000 Crores.