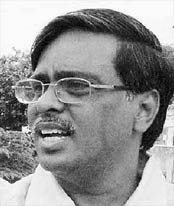 Prof. Chalam K.S. started his career as a Lecturer in Economics. He became a Reader and Professor of Economics in Andhra University. He was instrumental in developing the concept of Staff Development in higher education in India and became the Founder Director of Academic Staff College, A.U. in 1987, the first in the Country. He was Vice-President, President AP Economic Association, 1996; Life Member Indian Political Economy Association; Secretary, Indian Section Amnesty International, 1984-85; President, Mahendra Degree College Pathapatnam. He has organised several Seminars and Conferences as Director, Consultant for academic and social activist groups. He has attended the UN Conference on Racism at Tehran, Kathmandu, Cairo, Durban, South Africa. He has participated and chaired sessions of SAAPE, Colombo, Sri Lanka on Poverty in SAARC region and contributed to the publication of ‘Poverty in SAARC Countries’. He has participated in the international conference on ‘Privatization of Power and Water’ in Bangkok in 2002. Prof. Chalam’s paper on the ‘Origin of Science and Technology in India’ presented at the 31st South Asia Conference at Wisconsin, USA was applauded by scholars as a new field of research.

An internationally renowned expert on Staff Development and Political Economy , Prof. Chalam has published 22 books in English, 6 in Telugu, 90 research papers in journals including 8 in EPW and has written more than 200 edit page articles in Vaartha, Eenadu, Bhoomi & Jyothi in Telugu. His books on Political Economy and Educational Planning are offered as Text books in several universities. He is the Founder Editor of ‘South India Journal of Social Sciences’. As a Staff developer, he has conducted around 300 Refresher Courses in all major disciplines of Knowledge for Lecturers and Readers in Andhra University. He is considered as Father figure in Staff Development in higher education in India.

Besides Research guidance for the award of 10 Ph.D’s and 4 M.Phil’s, Prof. Chalam’s research includes 10 research projects of UGC; School of Economics including Govt. of A.P.; DPEP UNESCO project on Primary Education, 2000 and others. He was one of the earliest scholar to specialise in Economics of Education in 1972. This became an important branch of study in Economics as Human Development in 1990 at Andhra University. He was adjunct Professor at the Department of Education and Economics at Andhra University for two decades. He has delivered several endowment, memorial and keynote addresses at several Universities and Institutes. He is a visiting Professor at several Universities in India.

Prof. Chalam was honoured with Distinctions & Awards such as UGC Career Award in Economics-1984; Man of the year-1994; American Biographical-Institute, USA; Vijayasree, Int. Friendship Society, 1991; State Award – Teacher with Social Consciousness, 2000; International Educator - 2004 by International Biographical Centre, Cambridge and others. The Department of Economics, Andhra University conducted a National Seminar in his honour on his 60th Birthday during 6-7 October, 2008. The essays in his honour are being published in 9 volumes (a record) by his student Prof. D.P. Rao. Already 2 Volumes were published in his honour on his 50th and 60th Birthday by his former students.