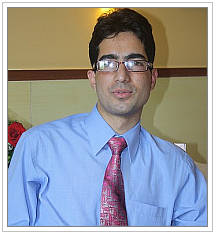 Dr Shah Faesal, a Kashmiri whose father was murdered by terrorists, made history recently when he topped the UPSC civil services exam. He shared his insights with Rediff.com  At 27, Dr Shah Faesal is the first Kashmiri native to have topped the Union Public Service Commission's civil services examination.  Faesal acknowledges that he has become an icon for Kashmiri youth, but says he is not entirely comfortable with this sudden adulation. Having lost his father to terrorists, the success has brought happier moments for Faesal and his family. Between travelling across the country and preparing for his year-long training before he is inducted into the Indian Administrative Service, Faesal tells what his success means to the people of Kashmir and why the rest of India must face up to the issues there.

How have the people in your neighbourhood reacted?
Oh, the response has been unprecedented! The youth have found a new role model and an icon.

Are you comfortable with that status?
No, I don't like being cast into being a demi-god because if people put you on a pedestal today they may also nail you if you fail to meet their expectations.

How are you coping with these expectations and working towards meeting them?
Now that I have got a platform, I am speaking out not just about my achievements and myself but also spelling out the concerns of the youth in the state.

What are the concerns of youth in Kashmir?
The youth there has a lot of potential and talent and the willingness to work hard. They seek opportunities and a safe space to realise their potential and someone to trust them.  The curtain of suspicion that lies between you (the rest of India) and us needs to be removed.

The general perception is that many Kashmiri youth do not consider themselves part of the national mainstream. Is that the case?
It is all about perception. Since you do not have a sense of belonging and relation with and no information about the people in Kashmir the image you carry is that it is a tourist spot.  You need to see that there is human tragedy and pain in the region. Identify with that. Own the pain.

Despite having a strong background in science, why did you choose Urdu as one of your optional subjects?
The intention was to dispel the myth about Urdu being a downtrodden and a neglected language. I wanted to prove that Urdu too can fetch you laurels.

Was that your idea in appearing for the UPSC too? To break certain myths?
Yes. The fact that there haven't been many people from the Kashmir province to appear for the UPSC in the last 15 years was a motivating factor. I wanted to dispel the myth that we are incompetent people and the profiling that goes on...

How do you plan to reach out to the people of Kashmir if you get the Jammu and Kashmircadre?
First, I'd like to ensure safe space to the youth. Besides this, my endeavour would be to bring about more connect and communication between the young people in Kashmir and the government so their grievances can be addressed.

Permalink Submitted by Drbilal on Sat, 2010-07-03 20:21.
HI I M Dr.BILAL FROM VADODARA,GUJARAT. I WANT TO BE CONTINUE TOUCH WITH Dr.FAESAL SHAH SO,PLEASE GIVE ME HIS MAIL ID. MY MAIL ID IS drbilal111@gmail.com. SO PLZ SEND ME HIS ID OR ANY OTHER WAY TO COMMUNICATION WITH HIM ON MY ID. I HEARTLY WAIT FOR RESPONSE.

Permalink Submitted by dheerajkmr on Wed, 2010-09-01 08:03.
Hi i am DhEERAJ KUMAR from Jamshedpur , Jharkhand . I want to be in touch with him. So, please give me his MAIL ID or any other way to have communications with him . MY EMAIL ID : dheerajlucky15@gmail.com

hello sir i m FAISAL KHAN From bangalore,karnataka.i want 2 become an ias officer like u...so can u please provide me ur e mail id n guide me in my career...i ll b very thankful 2 u...

HOW TO CREAK IAS

my salf satish parmar from gujrat sir please tall me how will i work . in 2013 i want to creak upsc so pls send your mail id