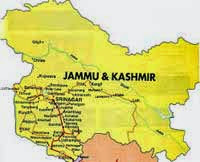 In a major relief for civil services aspirants from Jammu and Kashmir, the Government has extended till next year-end the upper age limit relaxation for the residents of the state to take the examination.

According to the notified changes, people of the state can write central civil services examination till they attain the age of 37 years.

The latest notification by the Union Public Service Commission (UPSC), which conducts the prestigious test, states that the lower age limit is 21 years and the upper bar is 32 years (as on August 1, 2014) to appear in central civil services examination.

"The Central Government has decided to extend the age relaxation to all persons who had ordinarily been domiciled in the state of Jammu and Kashmir during the period from January 1, 1980 to December 31, 1989 for a further period of two years beyond December 31, 2013," the Department of Personnel and Training (DoPT) said in an order.

It is clarified that nobody's interest will be adversely affected by the retrospective effect being given to the rules, it said.

A notification in Jammu and Kashmir (Relaxation of upper age limit for recruitment to Central Civil Services and Posts) Rules, 1997, for relaxing upper age limit till 2015 has been issued by the DoPT.