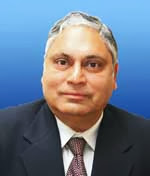 He was appointed on August 8 for a period of six years or until he attains the age of 65 years, whichever is earlier, a notification issued by the Ministry of Personnel said today.

The retired Indian Railway Traffic Service officer was chairman of Railway Board for two years from June 30, 2011 to June 30.

He is the eight member in the Commission.

Vinay Mittal, a 1975 batch officer of Indian Railway Traffic Service, is the new chairman, Railway Board and ex-officio principal secretary to the Government of India. Mittal has replaced Vivek Sahai who retired onJune 30, 2011. Prior to this appointment, Mittal was serving as General Manager, South Eastern Railway for nearly five months.

He was a member of the Indian delegation which visitedUSA and China in 2005-06 in connection with wagon designs and freight operations.

He is credited with improvements in freight loading and punctuality performance in Central Railway and North Western Railway.