Vedas and their branches:

The Word Arya means civilized one.

Priest related to Rigveda — Kotri or Motri Upveda of Rigveda is - Ayurveda.

SAMSKARAS AND RITES DURING THE VEDIC PERIOD 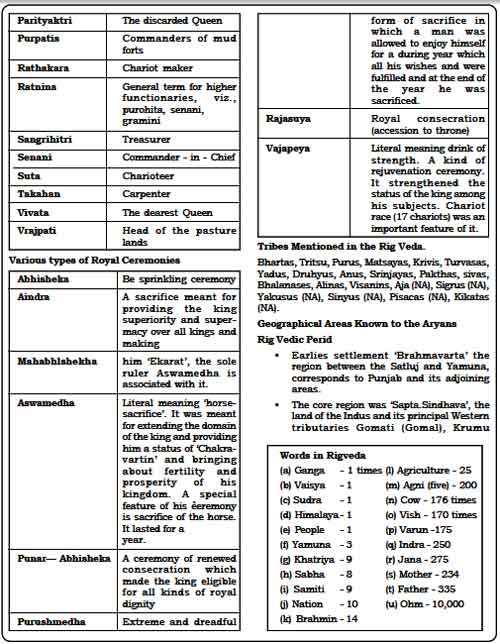 (Korrarn), Kubha (Kabul) and Suvastu (Svat) and eastern tributaries the five rivers of Punjab besides the valleys of Saraswati and Drishadvati corresponding to Eastern Afghanistan and West & East Punjab.

SOME OLD NAMES OF THE RIVERS

The Vedangas were considered important for understanding Vedas but they are not included in vedic literature.

The first two were required for reading the vedas, the third and fourth for understanding the vedas and the fifth and the sixth for the implementation of the sacrifice.

VEDAS AND THEIR BRANCHES

Original home of the Aryans: Viewpoints

Twelve Ratnins political functionaries who formed a king of kings council in the Later Vedic Period. Some of them were recruited from the non-Aryans also. Out of a twelve ratnins, three happened to be women. The following is the list of ratnin: