The single-celled protozoan ancestors of animals had their weight supported by water and were able to move by cilia or other simple organelles. The evolution of large and more complex organisms (animals) necessitated the development of support and locomotion systems. Animals use their muscular and skeletal systems for support,  locomotion, and maintaining their shape.

(i) Movement is a major characteristic of animals. This movement is a result of contraction of muscles. The skeleton helps transmit that movement. Skeletons are either a fluid-filled body cavity, exoskeletons, or internal skeletons.

(ii) Hydrostatic skeletons consist of fluid-filled closed chambers. Internal pressures generated by muscle contractions cause movement as well as maintain the shape of the animals, such as the sea anemone and worms. The sea anemone has one set of longitudinal muscles in the outer layer of the body, and a layer of circular muscles in the inner layer of the body. The anemone can elongate or contract its body by contracting one or the other set of muscles.

Note : Spiders use a combination of an exoskeleton for protection and fluid pressure for movement. Vertebrates have developed an internal mineralized (in most cases) endoskeleton composed of bone and/or cartilage. Muscles are on the outside of the endoskeleton.

Cartilage and bone are types of connective tissue.

THE SKELETON AND MUSCLES 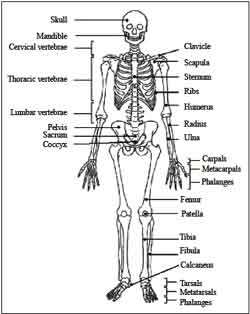 Each hand or foot ends in 5 digits (fingers or toes) composed of metacarpals (hands) or metatarsals (feet).

Limbs are connected to the rest of the skeleton by collections of bones known as girdles. The pectoral girdle consists of the clavicle (collar bone) and scapula (shoulder blade).

Although bones vary greatly in size and shape, they have certain structural similarities. Bones have cells embedded in a mineralized (calcium) matrix and collagen fibers. Compact bone forms the shafts of long bones; it also occurs on the outer side of the bone. Spongy bone forms the inner layer.

Spongy bone occurs at the ends of long bones and is less dense than compact bone. The spongy bone of the femur, humerus, and sternum contains red marrow, in which stem cells reproduce and form the cellular components of the blood and immune system. Yellow marrow, at the center of these bones, is used to store fats. The outer layer of the bones is known as the periosteum.

The inner layer of the periosteumforms new bone or modifies existing bone to meet new conditions. It is rich in nerve endings and blood and lymphatic vessels.When fractures occur, the pain is carried to the brain by nerves running through the periosteum.

Endochondral ossification is the process of converting the cartilage in embryonic skeletons into bone. Cartilage is deposited early in development into shapes resembling the bones-to-be. Cells inside this cartilage grow and begin depositingminerals.

There are three types of joints: immovable, partly movable, and synovial.

The outer surface of the synovial joints contains ligaments that strengthen joints and hold bones in position. The inner surface (the synovial membrane) has cells producing synovial fluid that lubricates the joint and prevents the two cartilage caps on the bones from rubbing together. Some joints also have tendons (connective tissue linking muscles to bones). Bursae are small sacs filledwith synovial fluid that reduce friction in the joint. The knee joint contains 13 bursae.

Injury, degenerative wear and tear, and inflammatory disorders affect joints. Sprains are common injuries that cause ligaments to rip of separate from the bone. Tendinitis (such as tennis elbow) and bursitis are inflammations of the tendon sheaths.

Osteoarthritis is a degenerative condition associated with the wearing away of the protective caps of cartilage covering the boneends. Bony growths or spurs develop as the cartilage degenerates, causing restriction of movement and pain. The cause is not known and may just be wear-and-tear associated with aging.

Rheumatoid arthritis is a severely damaging arthritis that begins with inflammation and thickening of the synovial membrane followed by bone degeneration and disfigurement. More women than men are affected. There may be a genetic predisposition to rheumatoid arthritis. Joint replacement may in some cases restore function.

Vertebrates move by the actions of muscles on bones. Tendons attachmany skeletalmuscles across joints, allowing muscle contraction to move the bones across the joint. Muscles generally work in pairs to produce movement: when one muscle flexes (or contracts) the other relaxes, a process known as antagonism.

Muscles have both electrical and chemical activity. There is an electrical gradient across the muscle cell membrane: the outside is more positive than the inside. Stimulus causes an instantaneous reversal of this polarity, causing the muscle to contract (the mechanical characteristic) producing a twitch or movement.

INTERACTION OF THE TWO SYSTEMS

The fundamental property of muscle tissue is contraction.

Cardiac muscle is the muscle of the heart. Smooth muscle in the muscle of internal organs such an stomach, intestines, urinary bladder blood vessels or uterus. Skeletal muscle are also known as voluntary muscles as they are under the control of will power. Tendons are whitish cond-like structures ‘which are attached to bones.

The sound waves are funded into the ear by the cup like external ear. The waves strike the ear drum and throw it into vibration. The vibration of the ear drum are communicated to a system of three minute bones.

The bones act like an efficient lever. The last of the bones fits like a piston into the inner ear. The inner ear is snail shaped and is a long coiled tube. Themajor potion called the basilar membrane have small hair like outgrowths. Vibration of hair cells make the hair rub against a shelf in the inner ear-the tectorial membrane. Rubbing of the hair result in transmission of a message to the brain which make us aware of the sound.