Receptors are parts of the nervous system that sense changes in the internal or external environments. Sensory input can be in many forms, including pressure, taste, sound, light, blood pH, or hormone levels, that are converted to a signal and sent to the brain or spinal cord.

In the sensory centers of the brain or in the spinal cord, the barrage of input is integrated and a response is generated. The response, a motor output, is a signal transmitted to organs than can convert the signal into some form of action, such as movement, changes in heart rate, release of hormones, etc.

DIVISIONS OF THE NERVOUS SYSTEM

Coelenterates, cnidarians, and echinoderms have their neurons organized into a nerve net. These creatures have radial symmetry and lack a head. Although lacking a brain or either nervous system (CNS or PNS) nerve nets are capable of some complex behavior. Bilaterally symmetrical animals have a body plan that includes a defined head and a tail region. Development of bilateral symmetry is associated with cephalization, the development of a head with the accumulation of sensory organs at the front end of the organism. Flatworms have neurons associated into clusters known as ganglia, which in turn form a small brain. Vertebrates have a spinal cord in addition to a more developed brain. Chordates have a dorsal rather than ventral nervous system. Several evolutionary trends occur in chordates: spinal cord, continuation of cephalization in the form of larger and more complex brains, and development of a more elaborate nervous system.

Two main components of the PNS:

Most sensory input carried in the PNS remains below the level of conscious awareness. Input that does reach the conscious level contributes to perception of our external environment.

The reflex arc is an automatic, involuntary reaction to a stimulus. When the doctor taps your knee with the rubber hammer, she/he is testing your reflex (or knee-jerk). The reaction to the stimulus is involuntary, with the CNS being informed but not consciously controlling the response.

Both systems innervate the same organs and act in opposition to maintain homeostasis. For example: when you are scared the sympathetic system causes your heart to beat faster; the parasympathetic system reverses this effect.

Motor neurons in this system do not reach their targets directly (as do those in the somatic system) but rather connect to a secondary motor neuron which in turn innervates the target organ.

The Central Nervous System (CNS) is composed of the brain and spinal cord. The CNS is surrounded by boneskull and vertebrae. Fluid and tissue also insulate the brain and spinal cord.. The brain is composed of three parts: the cerebrum (seat of consciousness), the cerebellum, and the medulla oblongata (these latter two are “part of the unconscious brain.

The medulla oblongata is closest to the spinal cord, and is involved with the regulation of heartbeat, breathing, vasoconstriction (blood pressure), and reflex centers for vomiting, coughing, sneezing, swallowing, and hiccuping. The hypothalamus regulates homeostasis. It has regulatory areas for thirst, hunger, body temperature, water balance, and blood pressure, and links the Nervous System to the Endocrine System. The midbrain and pons are also part of the unconscious brain. The thalamus serves as a central relay point for incoming nervous messages. The cerebellumis the second largest part of the brain, after the cerebrum. It functions for muscle coordination and maintains normal muscle tone and posture. The cerebellum coordinates balance.

The conscious brain includes the cerebral hemispheres, which are separated by the corpus callosum. In reptiles, birds, and mammals, the cerebrumcoordinates sensory data and motor functions.

The cerebrum governs intelligence and reasoning, learning andmemory.While the cause of memory is not yet definitely known, studies on slugs indicate learning is accompanied by a synapse decrease. Within the cell, learning involves change in gene regulation and increased ability to secrete transmitters.

During embryonic development, the brain first forms as a tube, the anterior end ofwhich enlarges into three hollow swellings that form the brain, and the posterior of which develops into the spinal cord. Some parts of the brain have changed little during vertebrate evolutionary history. 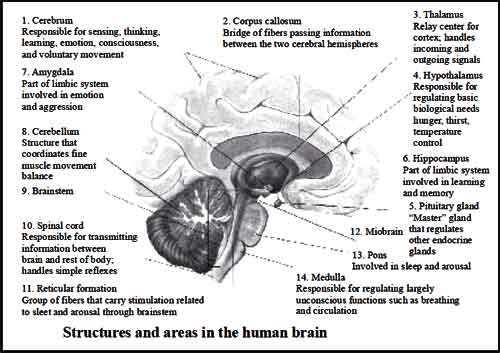 THE BRAIN STEM AND MIDBRAIN

The brain stemis the smallest and froman evolutionary viewpoint, the oldest and most primitive part of the brain. The brain stem is continuous with the spinal cord, and is composed of the parts of the hindbrain and midbrain. The medulla oblongata and pons control heart rate, constriction of blood vessels, digestion and respiration. The midbrain consists of connections between the hindbrain and forebrain. Mammals use this part of the brain only for eye reflexes.

The cerebrum, the largest part of the human brain, is divided into left and right hemispheres connected to each other by the corpus callosum. The hemispheres are covered by a thin layer of gray matter known as the cerebral cortex,themost recently evolved region of the vertebrate brain. Fish have no cerebral cortex, amphibians and reptiles have only rudiments of this area.

The cortex in each hemisphere of the cerebrum is between 1 and 4 mm thick. Folds divide the cortex into four lobes: occipital, temporal, parietal, and frontal. No region of the brain functions alone, although major functions of various parts of the lobes have been determined.

The occipital lobe (back of the head) receives and processes visual information. The temporal lobe receives auditory signals, processing language and the meaning of words. The parietal lobe is associated with the sensory cortex and processes information about touch, taste, pressure, pain, heat and cold. The frontal lobe conducts three functions:

Most peoplewho have been studied have their language and speech areas on the left hemisphere of their brain. Language comprehension is found in Wernicke’s area. Speaking ability is in Broca’s area. Damage to Broca’s area causes speech impairment but not impairment of language comprehension. Lesions in Wernicke’s area impairs ability to comprehend written and spoken words but not speech. The remaining parts of the cortex are associated with higher thought processes, planning, memory, personality and other human activities.

b. The Spinal Cord

The spinal cord runs along the dorsal side of the body and links the brain to the rest of the body. Vertebrates have their spinal cords encased in a series of (usually) bony vertebrae that comprise the vertebral column. The gray matter of the spinal cord consists mostly of cell bodies and dendrites. The surrounding white matter is made up of bundles of interneuronal axons (tracts). Some tracts are ascending (carrying messages to the brain), others are descending (carrying messages from the brain). The spinal cord is also involved in reflexes that do not immediately involve the brain.

Nervous tissue is composed of two main cell types: Neurons and glial cells. Neurons transmit nerve messages. Glial cells are in direct contact with neurons and often surround them. The neuron is the functional unit of the nervous system. Humans have about 100 billion neurons in their brain alone!While variable in size and shape,

a. Parts of Neuron:

All neurons have three parts.
Dendrites receive information from another cell and transmit the message to the cell body.
The cell body contains the nucleus, mitochondria and other organelles typical of eukaryotic cells.
The axon conducts messages away fromthe cell body.

b. Types of Neuron:

Interneuron's are found only in the central nervous system where they connect neuron to neuron. Some axons are wrapped in a myelin sheath formed from the plasma membranes of specialized glial cells known as Schwann cells. Schwann cells serve as supportive, nutritive, and service facilities for neurons. The gap between Schwann cells is known as the node of Ranvier, and serves as points along the neuron for generating a signal. Signals jumping from node to node travel hundreds of times faster than signals traveling along the surface of the axon. This allows our brain to communicate with our toes in a few thousandths of a second.

The plasma membrane of neurons, like all other cells, has an unequal distribution of ions and electrical charges between the two sides of the membrane. The outside of the membrane has a positive charge, inside has a negative charge.

STEPS IN AN ACTION POTENTIAL

The junction between a nerve cell and another cell is called a synapse. Messages travel within the neuron as an electrical action potential. The space between two cells is known as the synaptic cleft. To cross the synaptic cleft requires the actions of neurotransmitters. Neurotransmitters are stored in small synaptic vessicles clustered at the tip of the axon. Neurotransmitters tend to be small molecules, some are even hormones. The neurotransmitters cross the cleft, binding to receptor molecules on the next cell, prompting transmission of the message along that cell’s membrane. Diseases that affect the function of signal transmission can have serious consequences. Parkinson’s disease has a deficiency of the neurotransmitter dopamine. Progressive death of brain cells increases this deficit, causing tremors, rigidity and unstable  posture.

Input to the nervous system is in the form of our five senses: pain, vision, taste, smell, and hearing. Vision, taste, smell, and hearing input are the special senses. Pain, temperature, and pressure are known as somatic senses. Sensory input begins with sensors that react to stimuli in the formof energy that is transmitted into an action potential and sent to the CNS.

Mechanoreceptors vary greatly in the specific type of stimulus and duration of stimulus/action potentials. Themost adaptable vertebrate mechanoreceptor is the hair cell. Hair cells are present in the lateral line of fish. In humans and mammals hair cells are involved with detection of sound and gravity and providing balance.

Hearing involves the actions of the external ear, eardrum, ossicles, and cochlea. In hearing, sound waves in air are converted into vibrations of a liquid then into movement of hair cells in the cochlea. Finally they are converted into action potentials in a sensory dendrite connected to the auditory nerve. Very loud sounds can cause violent vibrations in the membrane under hair cells, causing a shearing or permanent distortion to the cells, resulting in permanent hearing loss.

Orientation and gravity are detected at the semicircular canals. Hair cells along three planes respond to shifts of liquid within the cochlea, providing a three-dimensional sense of equilibrium. Calciumcarbonate crystals can shift in response to gravity, providing sensory information about gravity and acceleration.

In the eye, two types of photoreceptor cells are clustered on the retina, or back portion of the eye. These receptors, rods and cones, apparently evolved from hair cells. Rods detect differences in light intensity; cones detect color. Rods are more common in a circular zone near the edge of the eye. Cones occur in the center (or fovea centralis) of the retina. Light reaching a photoreceptor causes the breakdown of the chemical rhodopsin, which in turn causes a membrane potential that is transmitted to an action potential. The action potential transfers to synapsed neurons that connect to the optic nerve. The optic nerve connects to the occipital lobe of the brain. Humans have three types of cones, each sensitive to a different color of light: red, blue and green. Opsins are chemicals that bind to cone cells and make those cells sensitive to light of a particular wavelength (or color). Humans have three different form of opsins coded for by three genes on the X chromosome. Defects in one or more of these opsin genes can cause color blindness, usually in males.

HUMAN EYES AND A COLORFUL WORLD

To see an object comfortably we must hold it about 25 con from the eyes.

Deficiency or absence of one or more type of cone pigments give rise to various focus of colour weakness or colour blindness.

Like haemophia, colour blindness is also a sex linked disease which affect only males.

Chemically all visual pigments are a combination of a derivative of Vitamin A and protein.