Tissue is a cellular organizational level intermediate between cells and a complete organism. Hence a tissue is an ensemble of cells not necessarily identical, but fromthe same origin, that together carry out a specific function. Organs are then formed by the functional grouping together of multiple tissues. The study of tissue is known histology.

The structure of animal tissue is directly related to its function. Tissue is groups of cells with a basic structure and function. There are four types of tissues.

It is a tissue that is made up of tightly packed cells. Without much materials with in these cells. The reasons for the tightly packed cells are to act as a barrier against mechanical injury, invading micro- rganisms and fluid loss. We can define epithetical tissue by considering two points in mind one is the number of cells layers and two the shape of the cells.

(i) On the basis of cell layers

(a) When an epitheliumhas a single layer of cells it is called a simple epithelium.

(b) Where as a multiple tier of cells are known as stratified epithelium.

(ii) On the basis of simple shape of cells: 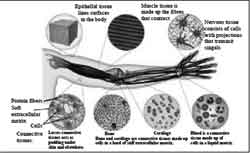 A. Areolar tissue : It fills spaces inside organs found around muscles, blood vessels and nerves. Its main function is to joins skin to muscles, support internal organs, help in the repair of tissues.Where as tendon’s main function is to connect muscles to bones and ligament is connects bones to each other.

B. Adipose tissue : its occurrence is below skin, between internal organs and in the yellow bone Marrow. Its main function is to storage of fat and to conserve heat.

D. Fluid tissue : Blood & Lymph blood transport O2 nutrients, hormones to tissues and organs. Where as leucocytes fight diseases and platelets help in cloting of blood. Lymph transport nutrients into the heart and it also forms the defense system of the body.

It is specialized for an ability to contract muscle cells. These are elongated and referred to as muscle fibers. When a stimulates is received at one end of a muscle cell, a wave of excitation is conducted through the entire cell so that all parts contract in harmony. There were three types of muscle cells: skeletal, cardiac, and smooth muscles.

A. Skeletal muscle : It attached primarily to bones. Its main function is to provide the force for locomotion and all other voluntary movements of the body.

B. Cardiac muscle : It occurs only in the heart. The contraction and relaxation of the heart muscles help to pump the blood and distribute it to the various parts of the body.

C. Smooth muscles : It can be found in stomach, intestines, and blood vessels these muscles cause slow and prolonged contractions which are involuntary.

D. Nervous tissue : This tissue is specialized with a capability to conduct electrical impulses and convey information from one area of the body to another. Most of the nervous tissue (98%) is located in the central nervous system. The brain and spinal cord. There are two types of nervous tissue neurons and neuroglia.

Neurons: it actually transmit the impulses, receptor nerve ending of neurons react to various kind of stimuli and can transmit waves of excitation from the farthest point in the body to the central nervous system. You will read all the details in Chapter Four. 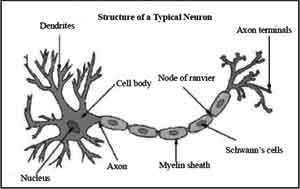 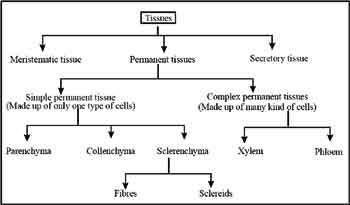 Plants are composed of three major organ groupsroots, stems and leaves. These are comprised of tissue working together for a common goal (function). In turn tissues are made up of number of cells which are made of elements and atoms on the most fundamental level. Plant tissue can be divided differently into two types:

A. Simple permanent tissue : These are of three types.

Selerenchyma fibres : they usually occur as patches in pericylcle of dicotstem and within xylem and phloem. These are source of natural fibres like jute, coir, hemp, Levin etc.

Sclereids or stone cells : they occur in hard covering of seeds shell of nuts, endocarp of stung fruits, bark and pith of certain plants. They provide stiffness to part where they occur.

B. Complex permanent tissue : complex tissues are made up of more than one type of cells. All these cells coordinate to perform a common function. Xylemand phloemare examples of such complex tissue. 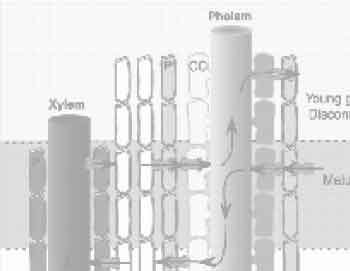 2. Meristematic tissue : meristematic tissue consists of activity dividing cells. This is found in regions such as the tips of stems or roots and lead to increase in length and thickness of the plant this cells are spherical, oval polygonal and rectangular and have their cell walls.

The growth of plants occurs only in certain specific regions.At these regions themeristematic tissues are present. New cells produced by meristem are initially those of mature, their characteristics slowly change and they become differentiated as components of other tissues. Depending on the region of occurrences of meristimatic tissues they are classified as-

(a) Apicalmeristem : it is present at the growing tips of steams and roots and increases the length of the stemand root. This is also called primary growth.

(b) Lateral meristem : this consists of cells which mainly divide in one place and cause the organ to increase in diameter and growth. It occurs beneath the bark of the tree in the form of cork cambium and in form of vascular cambium. The activity of this cambium results in the formation of secondary growth.

(c) Intercalarymeristem : it is located in between permanent tissues. It is usally present at the base of the node, inter node and on leaf base. They are responsible for growth in length of the plant. This adds growth in the girth of stem.

Comparison between the transport in mammals and plants