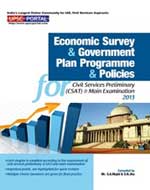 Contents of the Chapter:

The fiscal outcome of the Central government in 2012-13 so far indicates significant improvement over 2011-12. The fiscal outcome in 2011-12 was affected by macroeconomic developments of growth slowdown, high global crude oil prices, and sluggish financial market conditions for effecting the budgeted disinvestment programme. These developments continued through the first half of the current year. The government then pushed harder for reforms. An initial step was to set up the Kelkar Committee. Following its recommendations, the government unveiled a revised fiscal consolidation roadmap. The fiscal position of states has continued to progress with fiscal deficit budgeted at 2.1 per cent of gross domestic product (GDP). Staying on the indicated fiscal consolidation path is critical to sustaining the desirable macroeconomic outcomes not only in terms of higher growth in real GDP and lower inflation, but also in easing the financing of the widening current account deficit (CAD), for which India’s sovereign credit rating is important. Widening of the tax base and prioritization of expenditure are key factors in effecting the desired reduction in the Central government’s fiscal deficit over the medium term, and in reducing the key risks to fiscal marksmanship (the difference between actual outcomes and budgetary estimates as a proportion of GDP).

Latest available data indicate nascent signs of a turnaround in the macroeconomic environment. The stress witnessed in 2011-12 continued through the first half of the current year delaying the recovery process. This was manifest with growth continuing to be below 5.5 per cent, inflation moderating somewhat but continuing to be above 7 per cent, and only a brief moderation in the global crude oil prices. A pickup in financial markets, which gained steam as reforms were rolled out, the moderation in WPI inflation to 6.6 per cent in January 2013 and a bottoming out of industrial slowdown are broad indications of the turnaround. Indicating the trends in fiscal outcome in the first half of the current fiscal, the Mid-Year Economic Analysis 2012-13, pointed out that the mid-year threshold benchmarks in terms of fiscal responsibility and budget management (FRBM) rules had not been met and with the corrective measures proposed, fiscal deficit was likely to exceed budget estimates by 0.2 percentage point. The seriousness of the challenge can be seen by comparing the assumptions that were made when the Budget was presented with the actual outcome so far.

The continued high levels of global crude oil prices and domestic pressures that were manifest in persistent inflation, which necessitated keeping interest rates high, had their impact on aggregate demand (both consumption and investment). The Budget for 2012-13 attributed India’s growth slowdown in 2011-12 to weak industrial growth and underscored the recovery in core sectors at that time which was seen as a sign of gradual recovery. Real GDP thus was projected to grow at around 7.6 per cent with inflation moderating on year-on-year basis.

Recognizing the need for funding the higher levels of outgo on subsidies on account of elevated levels of global crude oil prices, higher provision was made for the same in Budget 2012-13. However, as part of the fiscal consolidation process, the Budget also announced the intent to restrict expenditure on central subsidies to under 2 per cent of GDP.

The second important feature is the introduction of the provision for 'Medium Term Expenditure Framework Statement’ in the FRBM Act. This medium-term framework provides for rolling targets for expenditure, imparting greater certainty, and encourages prioritization of expenditure. Together with the measures proposed to raise the tax-GDP ratio, the expenditure reforms are expected to yield better fiscal marksmanship, thereby mitigating key fiscal risks.

At the time of the annual budget, fiscal adjustment is essentially about the assumptions regarding the growth in total non-debt receipts and total expenditure of the Central government. The Budget for 2012-13 envisaged a growth of 22.7 per cent in non-debt receipts (revenue receipts plus nondebt capital receipts) and in total expenditure of 13.1 per cent over 2011-12 (revised estimates [RE]). Revenue receipts were estimated at Rs.9,35,685 crore in BE 2012-13, which comprised net tax revenue of Rs.7,71,071 crore and non-tax revenue of Rs.1,64,614 crore. Together with recoveries of loans of Rs.11,650 crore and disinvestment receipts of Rs.30,000 crore, the Budget for 2012-13 placed non debt receipts for the year at Rs.9,77,335 crore.

Tax buoyancy is a measure of the responsiveness of tax receipts with respect to GDP or National Income. A tax is buoyant when revenues increase by more than 1 per cent for a 1 per cent increase in GDP. In the post FRBM period, both direct and indirect taxes remained buoyant except in the crisis years (2008-9 and 2009-10) and 2011-12. During 2011-12, both direct and indirect tax revenues grew at a lower rate than what the BE envisaged as well as the 2010-11 growth rate mainly because of economic slowdown, weak market sentiment, slow investment growth, global uncertainty, and persistent high inflation. This led to a sharp fall in tax buoyancy in 2011-12. The decline has been more in corporate taxes than personal income taxes. During this period, direct tax buoyancy (ratio of direct taxes growth to nominal GDP growth) also declined and has been less than 1. This may be on account of lower profitability of corporates considering higher inflation.

There has been a compositional change in gross tax revenues since 2007-8. As a proportion of GDP, direct taxes accounted for 5.5 per cent in 2011-12, well below the peak of 5.9 per cent in 2007-8. The Budget for 2012-13 envisaged a growth of 13.9 per cent in direct taxes over 2011-12 (RE). Continuing with the policy of moderation of tax rates, the Budget has further broadened the slabs for individual taxpayers. The exemption limit for individual taxpayers below the age of 60 years has been enhanced from Rs.1,80,000 to Rs.2 lakh. The income slab for 20 per cent tax rate has been broadened for all individual taxpayers irrespective of their age and will now be applicable to total income between Rs.5 lakh and Rs.10 lakh instead of the earlier slab of Rs.5 lakh and Rs.8 lakh. The tax rate of 30 per cent will now be applicable to total income exceeding Rs.10 lakh. Securities transaction tax on certain transactions in specified securities has been reduced from the existing 0.125 per cent to 0.1 per cent.

The two specific measures aimed at expanding the direct tax base in the Budget for 2012-13 were the introduction of the provisions of GAAR in the Income Tax Act and extending the provisions of alternate minimum tax (AMT) to all non-company assessees. In an environment of moderate rates of tax, it is necessary that the correct tax base be subject to tax in the face of aggressive tax planning and use of opaque low tax jurisdictions for residence as well as for sourcing capital. The need for making statutory provisions for codifying the doctrine of ‘substance over form’ has been realized by introducing the chapter on GAAR. However, in view of the apprehensions raised about the Rules and the recommendations of the Shome Committee, the provisions have been deferred.