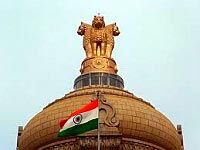 Which of the following statements are true regarding graphite ?
1. It is the crystalline allotrope of carbon.
2. C—C bond distance is greater than diamond.
3. The hybridisation of carbon in graphite is sp3.
4. Graphite is the good conductor of heat and electricity.

Which is the southrnmost place in the Indian union ?
(a) Kanyakumari (b) Rameshwaram
(c) Indira Point (d) Vivekanand

Who is legally competent under the Indian Constitution to declare war or conclude peace ?
(a) Prime Minister
(b) The President
(c) The Parliament
(d) The Council of Ministers

Which of the following statements is not correct about the haloalkanes ?
(a) They are derived from alkenes by replacement of one of its hydrogen atoms by halogens.
(b) They can be prepared by the addition of hydrogen halides to alkenes.
(c) They undergo nucleophilic substitution reactions in which the halogen atom is replaced by another atom or group.
(d) They can be reduced with lithium aluminium hydride to give the corresponding alkanes.