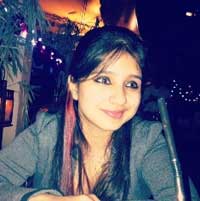 Umme Fardina Adil achieved what other women of her community could not do for more than six decades.

She became the first Muslim woman from India’s northeastern region to clear the Union Public Service Commission exam since the country became independent.

“Allah’s blessings and my parents’ prayers,” Fardina summed up her success in an interview to Two Circles.net.

To become an officer of the Indian Administrative Service was her childhood dream.

“I was obviously very glad to clear the civil services exam at the very first attempt itself. It means a lot to me,” she added.

Now, she has another dream: make India free of open defecation.

“I have already started my work by research in low cost sanitation technologies,” said the cheerful woman who now works as a senior programmer with Accenture Services Private Limited. And her pet project is “Low Cost Sanitation Technologies.”

“I want to be an IAS so that I can work for society” by efficiently utilizing government resources, she added.

“Assam gave the only President of India from the North East — Fakhruddin Ali Ahmed. Assam also gave the first and only Muslim woman Chief Minister of the country – Anwara Timur. But it took Assam 66 years to produce the first Muslim woman IAS officer,” Mahbubul Hoque, chairperson of the Education Research and Development Foudnation, the largest educational network in northeastern region, told a felicitation program.

Fardina was born and brought up in Guwahati, Assam’s commercial capital. She did her tenth grade from Disney Land High School, Khanapara, and the twelfth from Cotton College.

The she studied engineering from Mody Institute of Technology and Science, Rajasthan in Computer Science before taking up the job with the Accenture firm.

She said she would attempt the civil service exam again to improve her rank. “Since my ranking is 319 this time, I will not get IAS but will definitely try for this in future,” she explained.

Asked about the exam, she said it was definitely tough, “but with determination and hard work, it became a bit easier.”

Fardina says she gets excited over social causes.

She finds women in Assam in “a much better position” than their counterparts in northern India socially and economically.

At the same time, she realizes participation of Muslim women in public services is much lower than tribal and dalit women.

“It took 66 years of independence to produce a Muslim woman civil servant from Assam which is a very unfortunate scenario,” she said and added that the lacuna is not because of facilities are absent. I think it is due to lack of awareness,” she added.

She wants every Muslim woman to “believe strongly in their abilities and capabilities” and join every field to chase their dream. “And if they do so, I’m sure the entire scene will change,” Fardina predicted.

The aspiring civil servant says the increasing atrocities on women upset her.

When a girl was publicly outraged in Guwahati last year, she wrote a letter to the editor of The Hindu newspaper, “I have always been proud of my Assamese origin; for the first time, I am ashamed of it. It is time civil society in Assam woke up and ensured that such shameful incidents, so contrary to our culture, did not occur again.”

She termed the incident as “a shame on humanity” and said it made her realize her mother who used to tell her not to harbor any fear when in public. “If there is one bad person in the crowd, there will be 20 good people who will come forward to help you,” her mother told her.

“But when I read about a young girl’s molestation by a group of about 20 men on the busy streets of Guwahati with many people shooting the incident, but none coming forward to help, I realized my mother was wrong,” she wrote in the letter.

Fardina is convinced Indian women’s status would improve if they get equal opportunities from childhood. “There is no difference between a man and woman in their mental ability. Along with fulfilling duties as a daughter, sister, wife and mother, a woman should also think about herself as an individual,” she added.

A daughter should “have the complete right to take her decision independently like a son. Parents should convey that they believe in her ability and will support her always,” Fardina elaborated on ways to improve women’s lot in India.