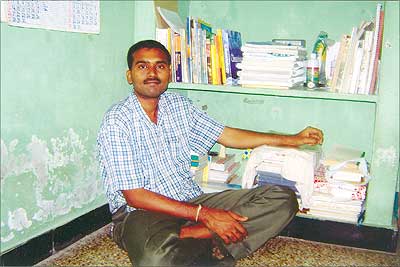 The 2006 competitive examinations for India's civil services is notable for the number of young people from non privileged backgrounds who feature in the merit list. Again, for the first time, none from India's elite metros appeared in the top ten.
Topping the Union Public Services Commission examination is Revu Muthyala Raju, a farmer's son and a member of the so-called Other Backward Classes, whose amazing story we will chronicle later in this special series. No less incredible are the stories of the other toppers. Like K Nandakumar, a lorry driver's son, whose success story we chronicle today.

His elder sibling, Aravind says, is a "jolly fellow" who would help with studies, who taught him chess and yoga. Nandakumar's success has, he says, given him cachet with his own friends in college, some of whom plan to write the UPSC exam.
"I have given them my brother's number, so they can ask him for tips," Aravind says, with more than a hint of pride.
For both Aravind and Nandakumar, their parents are "our gods". "We are proud of our father," Aravind says. "He is very hardworking and very thrifty."
At the centre of all the attention, Nandakumar is a bit bewildered by it all -- especially his sudden, unlooked for fame.
There is no secret to success, he says, seemingly puzzled that someone would even ask. "It was hard work and nothing else," he says. "It was a group effort. We are five friends who studied together."
The friends went together to trawl through the market, looking for books relating to the civil services; they then pored over their finds. Newspapers were devoured cover to back page, with meticulous care.
"For current affairs, they usually ask questions about the last one year, so you have to read a lot of newspapers," Nandakumar points out.
Like his younger brother, Nandakumar too believes that if there is a "secret" to his "success", it is his father.
"I am lucky to have a very friendly father," Nandakumar says. "He is very understanding. I can discuss anything with him. More than a father, he is a friend."
"He always allowed me to express my thoughts freely. Because of his job, he has had exposure to people and places all over India; maybe that is why he has given me so much freedom to express myself."
Down time with his father is a rare commodity since he is always behind the wheel of his lorry, travelling to wherever work takes him.
"My father doesn't even have a mobile; when he gets somewhere, he calls, and that is how we stay in touch." Nandakumar recalls how, when he passed the UPSC and got a job with the Railways, it was over a month before he could share the news with his father.