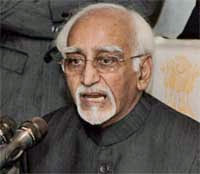 In linguistically diverse India, English has emerged as a common communication platform, said Vice President M Hamid Ansari while interacting with students at Sophia College for Women on Tuesday.

Ansari was asked about his views on whether the UPSC should test students in English.

"For a diverse country like India, finding a common communication platform is tough, but English has managed to do so," he said. "By testing in English, officers will be able to communicate effectively with colleagues and the people in any part of the country."

On India's diversity, Ansari said in other countries the currency note bears the denomination in one or two languages, but in India it does so in 17 languages.

"That's how diverse we are and we are not going to change," he said.

The decision of the new government not to take into account candidates' score in English in the UPSC aptitude test was mired in controversy. Even as many believed that testing candidates in the language is essential for a civil servant, the government discounted the marks allotted in the English section.